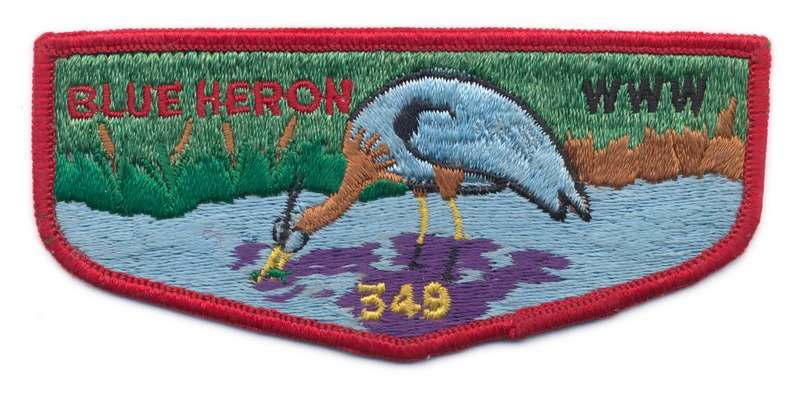 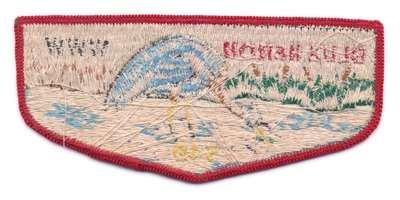 Designed by
No designer listed

From Mike Mccaughan on the renumbering: "1957 is correct on the grey birds. John Arrington and his father ordealed at the 58 fellowship, one got a grey bird [PV S2] and one an [BBv6] s2 [PV S3].

Dallas Brickhouse sewed a purple water [PV S1] on his uniform before he went to Philmont in 1957. He can corroborate the year as he still has paperwork from when he went, also he did jambo later that summer. He says this was the first flap the lodge received; an obvious mistake - they sent a diamond in to the patch company for the art. He had no time to wait for the correct order to arrive as it was after his departure for the event, and so on to the uniform it went.

This version of events was corroborated by an earlier lodge chief - John Hart - who was a 'patch hound' at the time. He echoed Dallas' notes about the sequence they were received (unprompted) & noted the lodge was slim on money in the early days and so we had to sell them in order to get the cash together to replace them. He corroborates the arrival time as 'the beginning of summer' and noted he spent the whole summer mowing lawns and buying as many as he could. Since they were in error the service restriction (16 or 32 hours then, I forget which) was waived as the lodge wanted the money to replace the order quickly. [John has also since given away as eagle gifts and traded away his whole pile, but said he had twenty something of them at one point.] He noted they had gotten the order in time for the 'correct flap' - the grey bird [PV S2]- to arrive in time for fall fellowship that year."

This issue is not part of any sets

There have been 9 revisions. Last change was update on 08 May 2018 by John Athayde

Is this information incorrect?
File a report and help us improve.

Login or Sign up to track your collections, create wishlists, and join the community!

This issue exists in the following catalogs: